The dynamic behavior of a fluid-filled, flexible container transported on a manufacturing line along a conveyer is simulated, with the goal of optimizing the product transport time. The simulation is at the level of quad-physics, meaning that four types of physics are simulated together. The transport of the bottle is simulated with multibody dynamics. The container (a bottle) is modeled as a flexible structure with the ability to undergo nonlinear deformation.

The simulation of the fluid within the bottle is done with a particle-based approach where the fluid momentum effects and sloshing forces on the bottle are accurately accounted for. The effects of a closed-loop, nonlinear controller is included to accomplish the transport in minimal time without approaching the tipping point for the bottle. The behavior of the nonlinear controller is tracked and can be implemented on an open-loop controller to control the actual motion of individual bottles on the transport line. 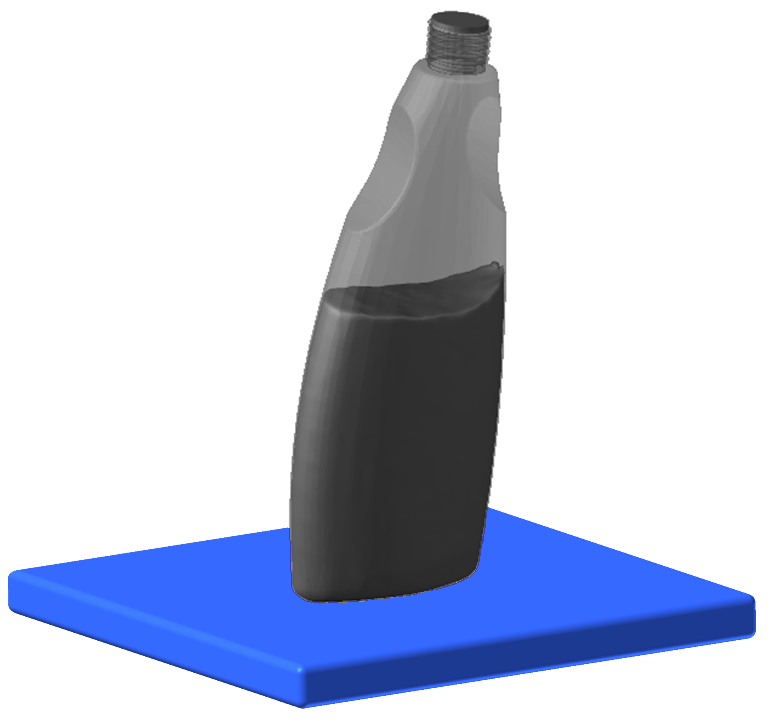 Even a small improvement in the transit time of the product on a conveyer line can lead to substantial cost savings due to the large number of products that are affected. However, the benefits of faster conveyance are quickly negated if the product tips over and requires manual intervention or that the manufacturing line be stopped for a time. Therefore, an extremely high-fidelity simulation is needed (quad-physics) in order to establish that a proper margin exists before the bottle can tip over. Accurate representation of the fluid is needed because the surge during acceleration makes a big difference in the tendency of the bottle to tip. The flexible body is needed for operations where bottles may contact each other or contact guides that prepare them to be boxed.

An early application of multi-physics for mechanical systems was fluid-structure interaction (FSI), that combined traditional computational fluid dynamics (CFD) with finite element analysis (FEA). The architectures of some mechanical computer-aided engineering software have evolved with multiple types of physics embedded in the software as well as an open architecture to interface to other types of physics. This enables the advanced and diligent user to include more than two types of physics in sophisticated models and thereby provide useful engineering results that could not previously be calculated.

The difficulty of doing a multi-physics simulation depends on the quantity of data being communicated between the different physics engines. The communication can be trivial if a simple actuator is being controlled, but can be complex if many entities in one physics engine interact with many entities from the other physics engine. In the example presented here there are many elements of the flexible body that contact the rigid surface of the conveyer transport. Even much more complex is the interaction between all of the element faces of the inside of the flexible bottle with hundreds of thousands of particles that are used to depict the fluid behavior, including the momentum due to sloshing.

Important considerations in performing a quad-physics simulation is to consider the dynamic response of the various physics being simulated and to make sure that the time step of each analysis is appropriate and that the data exchange interval for any co-simulation is frequent enough to avoid numerical instability. The robustness of the quad-physics process can be seen by evaluating the results with a different fluid viscosity, a different bottle stiffness, and different control parameters as compared to the nominal case.

Dr. Ross has over 30 years of CAE experience with a focus on Dynamics. Dr. Ross is a frequent speaker at conferences, a university professor and frequent author of industry papers.