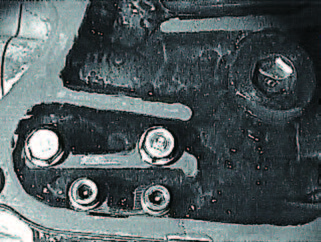 The breather system of a reciprocating engine requires a function for separating the oil mist from the blow-by gas when ventilating the inside of the crankcase. Gas-liquid separation behavior inside the breather chamber is a complex phenomenon that involves liquid breakup and coalescence. Directly predicting this behavior by grid method, which is a typical numerical calculation method, is challenging, because the calculation grid deforms and moves excessively.

This study focused on a particle method suited to the analysis of complex fluid phenomena such as free surfaces and liquid breakup and coalescence, and attempted to predict the oil separating behavior of the breather chamber with the Moving Particle Semi-implicit method. An air resistance model was applied to accurately simulate particle motion based on the gas velocity field history that was calculated in advance by the grid method. In addition, a particle coarse-graining model was newly proposed to take into account the effect of air resistance on oil mist.