The Westinghouse AP1000 nuclear reactor design is a pressurized water reactor with a power rating of 3415 MWt and an electrical output of at least 1000 MWe. The AP1000 design contains a variety of engineering and operational improvements providing additional safety margins and addresses the U.S. NRC severe accident, safety goal, and standardization policy statements. The most significant improvement of the AP1000 with respect to the previous generation is the use of safety systems that employ passive means such as gravity, natural circulation, condensation and evaporation, and stored energy for accident mitigation. These passive safety systems perform safety injection, residual heat removal, and containment cooling functions. Additional safety features of the AP1000 include a larger pressurizer, an in-containment refuelling water storage tank, automatic depressurization system, digital main control room, hermetically-sealed canned reactor coolant pump motors mounted to the steam generator, and increased battery capacity. In addition, the facility is designed for a 60-year life.

The AP1000 design provides for multiple levels of defense for accident mitigation (defense-in-depth), resulting in extremely low core damage probabilities while minimizing the occurrences of containment flooding, pressurization, and heat-up. Defense-in-depth is integral to the AP1000 design, with a multitude of individual plant features capable of providing some degree of defense of plant safety.

Six aspects of the AP1000 design contribute to defensein- depth: 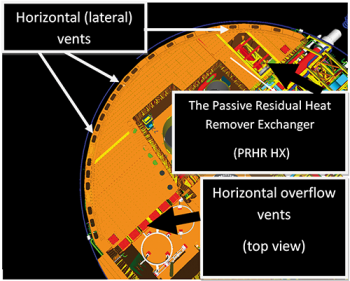 Last but not least, the AP1000 is designed with environmental consideration as a priority. The safety of the public, the power plant workers, and the impact to the environment have been carefully integrated in the design and construction of the plant. 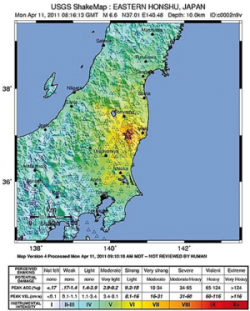 Objectives of the Analysis
The accident at the Fukushima Daiichi nuclear power plant in Japan has triggered the need for an immediate and coordinated response from the EU, aimed at identifying potential further improvements, in line with the fundamental principle of the continuous improvement of nuclear safety. In addition to the EU-mandated stress tests, ANSALDO NUCLEARE SpA has decided to perform an evaluation of the response of the In-containment Refueling Water Storage Tank (a key component of the Westinghouse AP1000 nuclear reactor) against the water sloshing induced by a Fukushima-Daiichi class seismic excitation.

The objectives of the analysis are to evaluate:

The analysis has been performed via two mainstream CFD codes: ANSYS/CFX5 and ANSYS/FLUENT. A specific geometry and mesh was created for these codes of the In-containment Refueling Water Storage Tank and the same seismic excitation was applied. 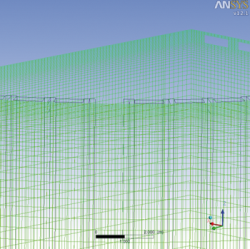 Fig.5 - Detailed view of the mesh at the corner
of the IRWST. The vents on the right side of the IRWST
are overlooking the Refueling Pit. Note the refinement
of the mesh in the upper part.

The mesh
The pre-processors of the two applications (ANSYS/FLUENT and ANSYS/CFX5) have been used to generate a mesh modeling the geometry for the IRWST. The mesh has been created from CAD models. Meshing density is linked to expected regions of high gradient in the simulated field. The solution domain was subdivided in a lower part (the bottom of the IRWST) where a coarser mesh was used and an upper part (close to the free surface) where a finer mesh was used to better capture:
a) the amount of water leaving the IRWST through the vents (horizontal and lateral);
b) the shape and position of the wave induced by the sloshing. 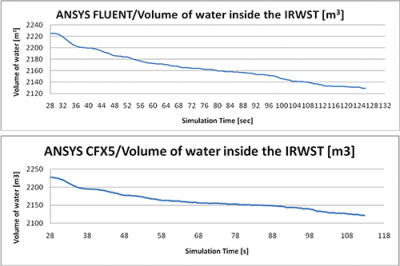 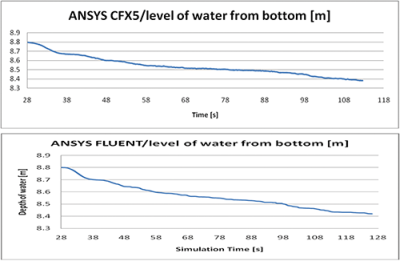 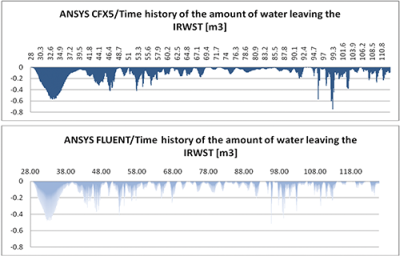 Fig 10a - Close-up view of the amount of water leaving the
IRWST via selected vents (time has been rescaled).

Results
The simulation has been performed using two well known and established applications each using a separate methods: the Free Surface method via ANSYS CFX5 and the Volume of Fluid method via ANSYS FLUENT. The results are therefore not biased by the selections of a specific method. Because of the low content of energy in the first 28 seconds of the acceleration time history, it was decided to begin the simulation from the 28th second, therefore the results shown in this report will begin from 28 seconds.

The following set of results will be shown as a function of time:

Conclusions
The analysis of sloshing in the IRWST induced by a major earthquake shows that there will not be a significant amount of water leaving the tank and that components key to ensure a continuous removal of heat will continue to be completely immersed and operative in the tank (IRWST). While the surface wave hits several times the peripheral walls, the roof and the PRHR HX, the pressures exerted on these components are well below the maximum design loads, therefore the sloshing is not posing any beyonddesign loads to the named components. The position, height and evolution of the surface wave are matched fairly well by the two applications. The two applications and numerical methods used for this analysis yield similar albeit slightly different results, and they can be safely be used as an engineering design simulation tools.

Fig 12 and 13 - Position of the water wave at selected
moments in or around the area of the PRHR HX
(ANSYS/CFX, time has been rescaled).

Fig 14 - Relative load on the Peripheral Outer Wall of the IRWST.
The load is the overall force acting on the whole wall.