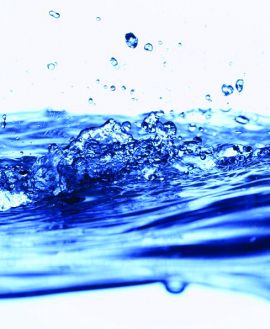 This paper deals with an activity carried out at the Calculation & Simulation Department in Pierburg Pump Technology Italy SpA. The subject of analysis is a vane oil pump for truck applications. This product represents new generation oil pump in automotive industry thanks to the possibility to reduce the displacement at high engine speed for fuel save consumption. Aim of this study is the calculation of dynamic torque applied to pump shaft in order to have a better understanding about the causes of unfitting failures between rotor and pump shaft revealed in aggressive durability tests.

Product presentation
Variable displacement oil pumps represent a significant contribution for fuel saving capability in automotive industry. In comparison to conventional gerotor pumps, they have the possibility to optimize the oil flow according to engine demand, with a significant reduction of power absorption. The oil flow rate of a vane pump, such as that of a general volumetric pump, depends on its actual displacement, i.e. the difference between the maximum and minimum trapped volumes. This difference is a function of the pump eccentricity that is defined as the distance between the rotor axis (which is fixed) and the control ring axis. That's why, in order to obtain the displacement variation in this kind of pumps, the control ring is made to slide in housing. 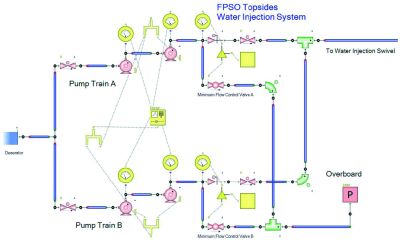 Identifying Surge Cases
Surge analysis on water injection systems is performed to determine the maximum pressure surges that can occur as a result of transient events such as rapid valve closure during pipeline operation, or pump trip and restart operations. The first step in any surge analysis is to identify credible cases where surge can arise. For example, closure of a single valve in a complex water injection network is unlikely to be an issue; however, closure of all wells while water injection pumps continue to operate (e.g. due to malfunction of a facility’s shutdown system) is potentially a serious concern.

The role of Flowmaster
After the surge cases have been identified, the next step is to build an accurate simulation model using Flowmaster. Both the Topsides and Subsea systems need to be considered to ensure confidence in any results obtained. Water injection models usually commence at the de-aerator, which, due to the very brief nature of the transient events can be considered to be a constant-head flow source. The water injection pumps and any major fittings are modelled downstream of the de-aerator. It is critical that control systems (e.g. minimum flow controllers), safety devices (e.g. Topsides bursting discs) and shutdown systems are included as they can have a significant impact on the results. For the Subsea system all the pipelines and wells are included. The model usually ends downstream of the injection trees, or immediately upstream of the reservoir. Choke valves are modelled to control the flow rate to each well and the injection wing or master valves are slammed shut to create a surge event. Subsea risers, pipelines and jumpers should be modelled using the elastic pipes option to improve simulation accuracy. When surge analysis is carried out at an early stage in the design of a water injection facility Flowmaster can be used to predict the maximum surge pressure and this can be used to select system design pressure. For surge analysis on an existing system Flowmaster can be used to investigate measures to mitigate surge (e.g. extending valve closure time) to ensure that the system’s maximum allowable surge pressure is not breached. 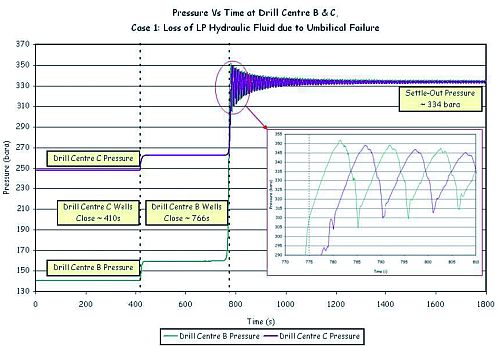 It is important that surge cases considered are realistic otherwise considerable expense may arise due to an overlyconservative design pressure on a new facility, or due to unnecessary modifications to an existing facility. The advantages of using Flowmaster for surge analysis include:

Ajmal Zia, Flow Assurance Consultant within the Offshore Oil and Gas industry explains how Flowmaster has been used for surge analysis of water injection systems, ranging from conceptual studies to detailed design. “We recently conducted surge analysis for a Client involving the tie-in of a new drill centre to an existing system. The design pressure of the existing water injection system had to be adhered to, but significant changes to the control system were possible because a new MCS (Master Control Station) was being installed to service the new drill centre.” explains Ajmal Zia. In all cases, the mitigating measures either eliminated surge pressure entirely, or reduced it within acceptable limits.

“Flowmaster was an indispensable tool on this project. The simulations made it possible to quantify the severity of each surge case and to assess the effectiveness of each solution.” concludes Ajmal Zia, Flow Assurance Engineer within the Offshore Oil & Gas industry.