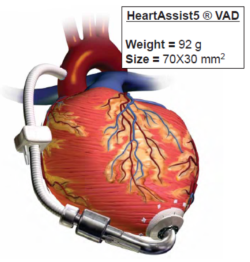 This technical article describes how high-end numerical Computational Fluid Dynamics (CFD) simulations were applied to mimic the realistic operating conditions of a Ventricular Assist Device (VADs) and analyze its hemodynamics in order to identify potential areas for optimization of the device’s performance, safety and efficacy. VADs are increasingly used to mitigate the shortfall in donor organs for cardiopathic patients awaiting heart transplants annually by providing a bridge-to-transplant, or to stabilize patients with congestive heart failure. While rotary VADs have smaller dimensions and simpler structures than pulsatile VADs, their continuous, high-speed, rotating blood-flow patterns represent a potential risk factor to patients from thrombus formation, thromboembolic complications or device malfunction due to pump thrombosis. Consequently, patients risk sudden death or having to face the risks of complex device-replacement surgery. Optimization of these devices could save lives and improve quality of life for cardiopathic patients likely to face long-term therapy.

A valid bridge to heart transplant

Cardiovascular diseases are recognized as the main cause of death worldwide, primarily related to heart failure. Owing to insufficient amount of eligible organs for heart transplant annually, various mechanical circulatory support devices as ventricular assist devices (VAD) and total artificial hearts have been developed and introduced in the market. VAD utilization as a mean of stabilizing congestive heart failure patients or as a bridge-to-transplant has increased dramatically over the past few years. In particular, rotary VADs offer the advantages of smaller dimension and simpler structures with respect to pulsatile VADs; however the continuous high-speed rotating blood flow patterns generated are a potential risk factor for adverse events, including thrombus formation, thromboembolic complications and device malfunction.

Pump thrombosis is one of the main causes for device malfunction, and patients are exposed to the risk of sudden death or the risks involved in complex device replacement surgery. In this work, computational fluid dynamics (CFD) simulations were performed to mimic the realistic operative conditions of the VAD HeartAssist 5® (HA5, ReliantHeart Inc., USA), reported in Fig. 1. CFD analysis can be exploited to predict blood flow streamlines passing through these devices: thrombus formation arises from the combined effect of elevated shear stress levels and recirculating flow patterns in specific regions within the device.

The advantage of using a sliding mesh technique in ANSYS Fluent

The CAD model of the device (Fig. 2) was provided by the manufacturer and optimized with Gambit 2.4.6 (ANSYS Inc., Canonsburg, PA, USA). The HeartAssist® LVAD has a weight of 92 g and the internal fluid domain was obtained subtracting the CAD model from a cylindrical conduct. The VAD components (Fig. 2) include the inlet flow-straightener, the impeller (rotor) and the diffuser; these parts are connected through a rear hub, connecting the stationary flow-straightener and the impeller, and a front hub, connecting the impeller and the stationary distal diffuser. Subsequently, the entire domain was discretized, with the Meshing module of ANSYS Workbench v15.0, into 2.5 million of tetrahedrons prescribing a characteristic mean size of 0.3mm. Exploiting the capabilities of the ANSYS CFD solver Fluent, a sliding mesh technique was adopted to simulate the fluid-structure transient rotating behavior of the device (Fig. 2): the rotor-stator interaction can be modeled by allowing the mesh associated with the rotor impeller to rotate relative to the stationary mesh associated with the straightener and the diffuser. Specifically, a rotational speed (w) was set to the rotor part and two mesh interfaces were defined between the moving (rotor) and stationary (straightener, diffuser) domains. In order to simulate the clinical operating condition of the device, the impeller spins at 9,000 rpm clockwise, generating a corresponding cardiac output of 4.0 L/min.

The sliding mesh interface was assigned to the impeller, which external wall was modeled as “moving relative to adjacent zone”, with an opposite rotating direction. The remaining surfaces were defined as stationary walls with no slip condition. A mass flow rate of 0.07 kg/s, corresponding to a physiological Cardiac Output of 4 L/min, was set at the inlet boundary surface. A zero pressure was set at the outlet boundary surface. Blood was modeled as a Newtonian incompressible fluid with viscosity (μ) of 0.0035 kg/m-s and density (r) of 1,081 kg/m3. The simulation was run in ANSYS Fluent (ANSYS Inc., Canonsburg, PA, USA), exploiting the Navier-Stokes governing equations, on an Intel Xeon (2.93 GHz) workstation with 24 processors.

The sliding mesh numerical approach proved able to replicate the operating conditions of the HA5 LVAD, within a physiological regime. We observed a pressure head of the device of approximately 80 mmHg capable of easing the load of the left ventricle (Fig. 3). High pressure-loss regions suggested possible optimization of the LVAD design, as depicted for instance near the distal part of the rotor. 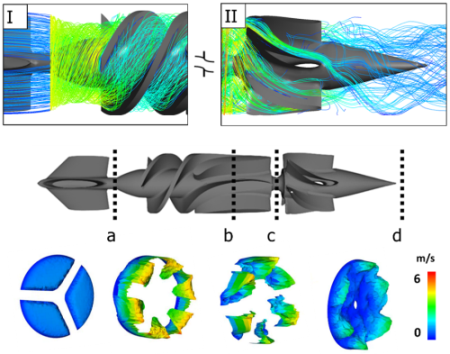 Moreover, ANSYS CFD-Post was used to obtain a qualitative visualization of the velocity field by means of streamlines calculation (Fig. 4, upper panels). Specifically, the interface region between the straightener and the rotor (I) depicted a laminar rotational flow, whereas the one between the rotor and the diffuser (II) highlighted a residual rotational tendency of the flow field.

Velocity magnitude 3D contour maps (Fig. 4, lower panels) were extracted at different locations of the fluid domain. On the one hand, the rotor part was characterized by the highest values, close to 6 m/s, with a laminar distribution of blood flow; whereas, on the other hand, the diffuser was characterized by lower velocities but residual flow helicity. The outflow tract was closer to physiological values of 1 m/s and was characterized by the reduction of helical flows. Furthermore, wall shear stress maps were computed to highlight locations that may be associated to the highest blood damage due to elevated shear stresses (Fig. 5). The highest peak values were noticed in the proximal part of the rotor and evidently associated with both the impact of blood flow hitting the device as well as the high-spinning rate of the rotor.

In conclusion, high-end numerical CFD simulations allowed to evaluate the HA5 LVAD hemodynamics under realistic working conditions, highlighting locations of sub-optimal performances of the device. Hence, best exploiting the potential of ANSYS Fluent, the proposed approach may be pivotal in order to deepen VAD fluid dynamics, to estimate its hemolytic potential and optimize its design, potentially leading to enhanced safety and efficacy of VADs for long-term destination therapy.

EnginSoft USA can help with your CFD Projects