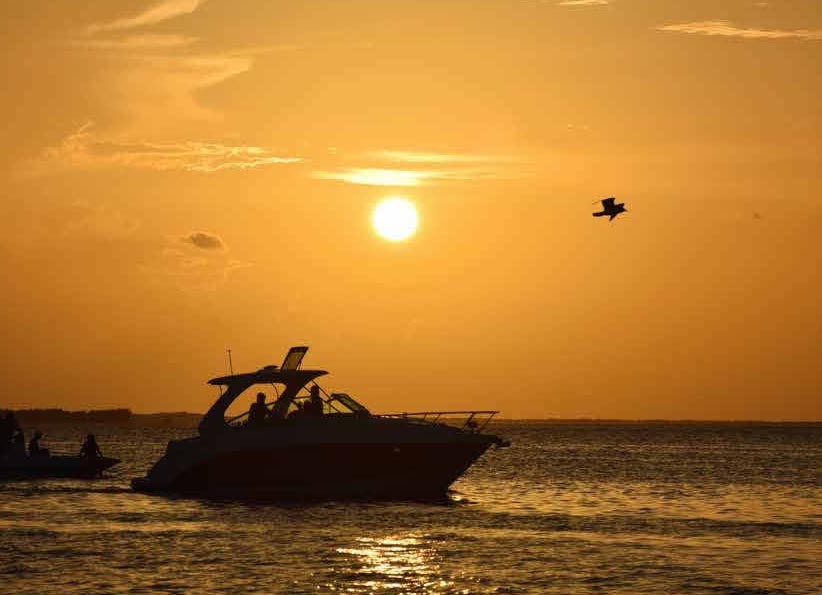 This article presents the preliminary usage statistics and validation results of the LincoSim web application. LincoSim [1] is an innovative web application dedicated to ease the process of designing planing hulls by means of automated computational fluid dynamics (CFD) runs. It is being developed within the EU-funded LINCOLN [2] project. The web user interface was opened to partners in April 2018 and now supports three different groups of users that have performed hundreds of CFD runs (0 degrees of freedom (DoF) and 1 DoF), performing a preliminary set of solver validations. The preliminary results in terms of usability and robustness are positive, with about 800 completed 0-1 DoF simulations, and more than 100 geometries uploaded on the development instance, and about 100 completed 0-1 DoF simulations and more than 20 geometries uploaded on the production instance. The validation test set for the basic configuration of the 1 DoF solver is also encouraging, with an average error of about 15% for the drag evaluation. A set of tailored sea-trial tests and physical towing tank experimental campaigns using two different vessels were planned to be completed by the end of 2018 and their results will be used to further improve the 2 DoF solver’s accuracy. 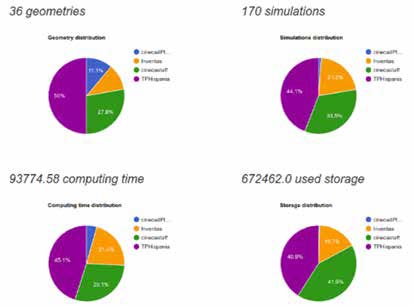 LincoSim is a web application being developed within the EU-funded LINCOLN Project, an EU Horizon 2020 research project of 36 months’ duration (1st October 2016 – 30th September 2019, Grant Agreement No. 727982) to use innovative design methodologies and tools to develop three types of completely new vessel concepts in the maritime sector using dynamic simulation model testing. The application eases the design of planing hulls by means of automated CFD runs. The web user interface includes the expressive Web graphics library (WebGL) to create the 2D and 3D visualizations necessary to prepare, verify, start and analyze the CFD simulations using only the hull geometry and a minimal set of physical parameters. Moreover, once the CFD model inputs are set, the web services automatically manage the interaction with the computational resources. The underlying CFD engine was developed using standard, robust OpenFOAM solvers (see [3]) which enable the cost-effective solution of 3D Navier-Stokes equations including dynamic mesh motion (for N-DoF simulations). In April 2018, LincoSim was opened to LINCOLN project partners only and what follows is a presentation of these users’ experiences and the statistics concerning the three business cases involved.

LincoSim is currently equipped with a set of different solver configurations for each business case group, as follows

Each solver differs from one group of users to the other in some specific value, due to the necessity for each solver to be able to work correctly on the very diverse behaviors of the three different business cases. In real-life cases, hulls present very precise design ideas that deeply impact their performance during operation. Using different specific solver configurations for each business case enables the designers to capture each specific behavior with a single, common set of inputs. This principle renders the LincoSim GUI identical, hiding all these differences from the user’s point of view. At the computational back-end, the user inputs are used differently by the solver configuration to build the CFD model, either to mesh it, or to post-process the outputs. Our philosophy was to design the LincoSim solvers to share the same numerical solver characteristics, so that equations are solved in a standard way in all the workflows, but the way the CFD model is built or meshed changes. The captivebase solver configuration is very general and is useful for performing zero -degree-of-freedom simulations. The user sets a given pitch and sink position for the hull and this orientation and Center of Gravity (CoG) remain constant during the whole simulation. This kind of setup is useful for quick, preliminary evaluations of a hull. The values of the hull mass and the moments of inertia (Ixx,Iyy,Izz) are not used within this configuration because the dynamics of the hull are totally excluded during the simulation.

This solver configuration does not use the X and Y CoG values or the values of the moments of inertia Ixx and Iyy as inputs. The limit of the 1DoF solver lies in the fact that the angle imposed as the estimated input value can be unrealistic, making the final set of outputs almost meaningless for designers. For the 1DoF solver, the dynamics of the CoG are limited to a rigid vertical translation of the hull and the solver autonomously reaches the convergence stop criteria when the value of the vertical velocity flattens out around zero for a certain period of time.

Instead, the 2DoF solver configuration is a complete hull body dynamics solver that allows very general hull movement around the CoG. The hull is therefore free of sink and trim to find the equilibrium of the hydrodynamic forces resulting from the pressure of water on the hull and the mass of the hull. The solver runs until the value of the vertical velocity and the angular velocity of the hull flattens out around zero for a certain period, then the automatic convergence criterion is activated, and the simulation is interrupted.

This type of solver means that you can also study very complex hulls, such as planing hulls. In this latter type, the final positioning of the hull in terms of sink and trim is difficult to predict due to the presence of very complex hydrodynamic structures, so other solvers will be very ineffective in predicting meaningful amounts of hydrodynamics due to lack of knowledge in the input phase.

Two major challenges for LincoSim are its usability for designers and the robustness of the platform. From the point of view of robustness, 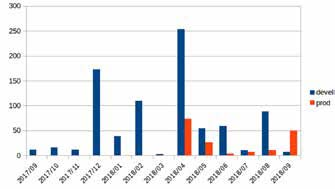 it is necessary to consider the robustness of the software of the devised platform and the hardware of both the virtual machines hosting the Web services and the connected high-performance computing (HPC) clusters. In addition, there is the difficult task concerning the robustness of the CFD solver. From a usage point of view, the transition from a carefully designed and implemented architecture to real-world use is a clear challenge. This section provides some statistical data that is being used to assess LincoSim after its first 6 months in production.

The LincoSim service uptime, or the reachability of the web-page https://lincosim.cineca.it, which includes the uptime of both the virtual machine as well as the operations of the web-server software stack, was 99.2%. Even considering that this is a completely custom software architecture, it is a very good result.

With regard to the effective functioning of the HPC cluster used, i.e. the Galileo cluster at Cineca (see http://www.hpc.cineca.it/ hardware/galileo-0) the analysis is more difficult because very specific difficulties can render some jobs not correctly operational. Fortunately, during these first six months of production, such events involving LincoSim have been very rare, and have been fairly transparently managed for users by the LincoSim staff.

Regarding the assignment of HPC resources, the three nodes reserved on the cluster and managed by a state-of-the-art job scheduler used by many of the world’s supercomputers (Slurm Workload Manager) guaranteed very short wait-times for the jobs (normally within 24 hours), except in the last two weeks of the period in which a peak in requests led to a delay of a few days in the completion of all jobs submitted. Apart from this delay, everything was managed by the platform in a completely transparent way for the user.

For completeness, we report some statistics here regarding the actual use of the platform, relating to both active instances of LincoSim: the development one used internally for testing new features and developing new simulation setups, and the production one used directly by users and active since April 2018 (see Table 1).

For the production instance, we have also reported the statistics on the use of resources by the various organizations included in the LincoSim project.

Overall, we believe that in its first six months of production, LincoSim has had a positive response regarding usage from the various partners. In addition to what has been reported here, several exchanges with partners have shown that the platform is comprehensively usable by the type of user for which it was designed. Future development prospects also remain open in view of the innovative approach that has been taken.

It is also interesting to compare the time trend of the number of simulations launched each month for the two instances. The peaks of the development instance correspond to the periods of greatest intensity of the solver tests, with attention to the generic approach used in addition to the quality of the results (see Figure 2).

Starting from April 2018, the LincoSim web application was opened to three groups of industrial partners involved in the LINCOLN project and it has been massively used to support the design process of innovative vessels by means of automatic CFD runs. The preliminary statistical results in terms of usability and robustness are really encouraging. Hundreds of simulations have been carried out by nonexpert users in a few months. Nonetheless, we are now undertaking full validation tests to more properly assess the application’s accuracy by referencing towing tank data. This last activity, planned for completion by September 2019, should provide a meaningful benchmark on the real effectiveness of the tool.