RecurDyn V9R2 introduces some game-changing possibilities in the context of multi flexible body dynamics (MFBD): full flex bodies can now react to thermal loads to account for their thermal deformation; the interface for Particleworks software has been extended to allow for cosimulation between full flex bodies and incompressible fluids; a new solver (called “Advanced Hybrid Integrator”) radically reduces the solution time for several types of models; while many upgrades to the GUI make V9R2 the most usable and powerful version of RecurDyn ever.

Thermal loads can now be applied to a pre-defined set of nodes on full flex bodies.

Temperature is defined through expressions, providing unlimited power by enabling the input value to be linked either to time or to other quantities calculated within the model. The RecurDyn solver computes the resulting thermal deformations and considers their influence on the developing dynamics. Thermal stresses and strains can be visualized in the contour plots at the end of the simulation.

Co-simulation of flexible models with Particleworks

RecurDyn was already the only multi-body software enabling the coupled simulation of mechanics and fluid dynamics, however, that capability was restricted to rigid bodies only.

Version V9R2 improves the interface between RecurDyn and Particleworks, allowing the use of fully flexible bodies. This establishes a new frontier in multi-body simulation by providing the technology to efficiently reproduce any fluid structure interaction (FSI) in dynamic conditions. 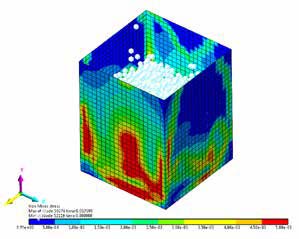 The dedicated post-processor included in the new interface makes it easy to extract many quantities from the simulation: RecurDyn provides access to both the fluid pressure (acting on the walls) and to the stresses/strain generated by the superimposition of fluid loads and inertial reactions, while Particleworks enables all the fluid properties, including the kinematics of selected particles, to be mapped.

Overall, these added capabilities make it possible to simulate applications that were not possible to tackle before.

To date, RecurDyn has included three main solvers: the well-known differential/algebraic system solver (DASSL) provides good stability, even though it introduces excessive numerical damping at high frequencies; the highly-recommended implicit generalized alpha solver’s performance has been balanced by FunctionBay’s developers to maintain stability for low-damped systems while reducing numerical damping in the high-frequency range; the hybrid solver is proprietary technology developed by FunctionBay which combines implicit and explicit formulations for pre-selected variables to enable the integration of models that include both rigid and flexible bodies. 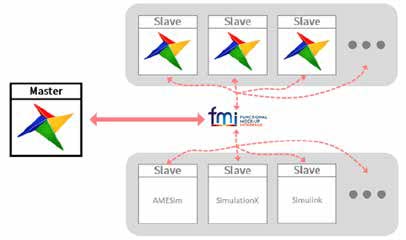 RecurDyn V9R2 provides an Advanced Hybrid Integrator which has been developed to preserve the speed and stability of the proprietary Hybrid solver, while returning the low damping of the implicit generalized alpha solver in the high-frequency range.

RecurDyn V9R2 also brings new capabilities to its co-simulation mode. Thanks to the functional mock-up interface (FMI), RecurDyn can be connected to multiple and different codes that support this standard. For example, it is possible to combine a hydraulic actuator created in AMESim with a control system developed in MATLAB simulink, to drive a digital prototype built in RecurDyn.

The new release of RecurDyn also takes a consistent step toward gear and driveline simulation with the inclusion of the “Gear Involute Contact”, an analytical type of contact to efficiently solve the tooth-to-tooth interaction of involute gears. This feature uses a pattern of 2D involute profiles to represent the thickness of the teeth, so that the 3D interaction is fully captured. The new contact type is applicable to spur gears, internal spur gears, helical gears, and internal helical gears.

V9R2 also includes RecurDyn/Acoustics, a brand new toolkit for acoustics analysis. This module calculates equivalent radiated power (ERP), starting from the outputs of any MFBD simulation. The resulting distribution of the ERP over the surfaces is, in its turn, the starting point for predictive analysis of the noise emitted by mechanical systems.

RecurDyn V9R2 introduces support for Julia scripting within CoLink’s user-defined blocks. Many users will feel familiar with Julia Script as it is similar to MATLAB language. General enhancements V9R2 also includes a number of general enhancements to improve the everyday user experience. The internal mesher has been uppowered to generate better meshes in less time. The new version offers a surface meshing preview, an increased number of remeshing controls, new mesh healing features and a quality check tool to properly assess the final mesh. Other improvements apply to the belt toolkit, the CAD import interface, the eTemplate, ICF generation, the parameter template, the Activate/Deactivate option for RFlex bodies, the RFI optimizer, and the plot interface. Special features have been also added to pre- and post-process reduced flex and full flex bodies.

structure additionally incorporates rules-driven parametric CAD model creation, which automates the structure of complex shapes and can consolidate non-geometric angles also, for example, cost focusing. Most creators are accustomed to making a CAD model first, at that point exposing it to reenactment just before creation, to foresee how the last item will perform.